Hello Beyond Borders Readers,
As we welcome the fall season, Beyond Borders will now be writing on a quarterly basis. Between our quarterly posts, we welcome posts from guest bloggers and plan to keep you all abreast of our research and on-going academic thoughts. Those interested in guest blogging can email us at beyondborders.blogger@gmail.com. Thanks for your readership and we look forward to continuing dialogue with you all.
Best,
The Beyond Borders Team 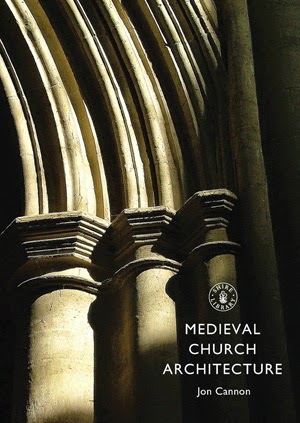 Over the past two years, Beyond Borders has been fortunate to have had a great deal of contact with our readers, guest bloggers, and other medieval academics sites and blogs. At first, our correspondences pertained to our posts, and met our original goal of creating an academic dialogue in a cyber-community. Later, our communications evolved to discussing ideas for conferences, interacting with other websites, and most recently, there has been an influx of information coming to us about recent academic publications. In this post I would like to give a brief review one of these publications, brought to my attention by Shire Books & Old House. Shire was founded in 1962 and over these many years has built an extensive library, including a rich selection of books related to academia and learning. This year Shire is proud to announce a new addition to their library dedicated to the study of British medieval architecture. Medieval Church Architecture by Jon Cannon is a short guide to learning and distinguishing the decorative styles that developed in Britain from the early Anglo-Saxon period to the High Gothic. As someone who is both a teacher and is continuing their education, I found this publication an asset to the study of medieval-built churches.

I’d firstly like to refer to Cannon’s introduction where he defines his intentions: “The aim of this book is to enable beginners to recognise these [medieval] styles as they appear in England.” I must agree with Cannon and Shire in this description. This publication is not for those well versed in the subject per se, but for those new to the study of architecture. The book is divided into chapters by style, with each chapter including an introductory synopsis, a section on the development of the style involving the historical events leading to the style, and an extensive “diagnosis” (as Cannon calls it) of the style which gives descriptions of the ornamental and structural details. The book also makes sure to highlight key terminology throughout the text and a glossary is included at the book’s conclusion. Having taught an art history survey, I wish I would have had such a vocabulary list for my students.  From an educator’s perspective, Cannon’s work is a helpful classroom companion. Most importantly of all, I feel that with this text, a student/beginner would be able to distinguish one style of British medieval church architecture from another.

The title suits well as Cannon describes the cultural translation between continental Europe and Britain, but the decorated themes covered are predominately those of British architecture, only bringing in a European example to set precedence for the rise of a particular style, rendering the book's reach more limited than the title initially suggests. Still, Cannon work does help to organise this information by focusing on six stylistic movements for British medieval architecture: Anglo-Saxon, Norman/Romanesque, Transitional (Romanesque to Gothic), Early Gothic, Decorated, and Perpendicular.  Each chapter is accompanied by images and diagrams. Along with categorising these styles, Cannon places an emphasis on the overlap likely to happen with the construction of both smaller and greater structures, resulting in a hybrid style that can make it more difficult to identify a style and date a structure.  Cannon’s categorisation and use of imagery build a visual lexicon for the reader.

Shire Books has generously offered five copies of their recent publication, Medieval Wall Paintings, for Beyond Borders to share. The first five readers to contact us at (beyondborders.blogger@gmail.com) shall receive a hard copy free of charge.