The Trans-medial Everyman originated as part of the advanced module class “All the World’s a Stage,” in which my colleague Riad Nassar and I transformed the Middle English Everyman into a simultaneous theater and film production. Based on selected results of this theater fieldwork, this paper will question the relationship between medievalism and modernity.[1] I will do this with a theoretical and historical approach based on Latour’s critique of modernity, as well as with a synchronic approach based on Garfinkel’s studies in ethnomethodology. Latour’s understanding of modernity will serve as a model for my theoretical framework, while Garfinkel’s study of everyday methods of organizing and obtaining social order, will help to understand the working progress of adapting a medieval play into a trans-medial stage performance.[2]

Latour’s Notion of Modernity as Translation and Purification
For Latour, “the word modern designates two sets of entirely different practices, which must remain distinct, if they are to remain effective […].”[3] These two practices are namely translation and purification. Translation is the creation of mixtures between completely different types of beings, hybrids of nature and culture.[4] Purification on the other hand, is the creation of two completely separate ontological zones, the separation between nature and culture.[5] To be wholly modern, we have to consider translation and purification separately; as soon as we look at them simultaneously, we immediately stop being wholly modern.[6]

This creates the “modern paradox” - through translation, we have a mixture of nature and culture, while on the other hand, we have the separation of them through purification.[7] As a result, a ‘modern tension’ arises.[8] In order to cope with this tension, Latour’s modernity relies on the four guarantees.[9] They separate nature and culture, and prevent an oscillation between them; but because modernity always has to cope with this underlying oscillation, modernity is never entirely modern.[10] Latour’s critique of modernity will allow me to look at how the students made these oscillations aesthetically productive. This means that under such conditions, the aesthetics of medievalism is a way to experience the fact that we cannot be wholly modern. If pre-modern societies are by definition societies that do not differentiate between nature and culture, then the oscillations imply our status of pre-modernity as well. The conclusion should therefore be that we are not as wholly modern as we want to be, and that the Middle Ages were not as wholly unmodern as we would like to think.

The Translation Process
One of the main tasks for the students was the adaptation of the medieval allegorical characters, who themselves are already hybrids.[11] The students thus translated the medieval characters according to what Garfinkel calls the “selection operations,” where a “paradigm” is chosen that is based on “a set of operations whereby a demand population is produced from a population of eligibles.”[12] As a result, from all the eligible allegorical characters, the students chose the ones which they felt would be most in demand to transport the moral of the play. An example of this is Kinship. The medieval allegorical figure of Kinship is one person, who embodies a large extended family. The students re-hybridized the allegory Kinship into a modern family: mother, father and a sibling, mixing nature and culture.

Music also plays a great part in the translation process. It is used to create the mixture of nature and culture. In the chosen clip, music, as a cultural product, is mixed with the arrival of Death, a natural phenomenon, to create that untimely grim reaper effect.

Or here, where the man-made sound effect externalizes the natural process of death. 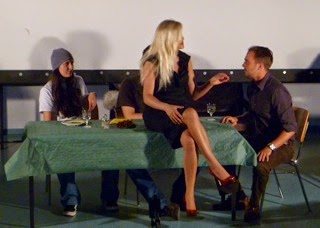 To exemplify the separation of nature and culture in purification, I have chosen Death and God. By giving death a human shape, it becomes a man-made construction. The students’ choice to represent Death as a femme fatale is in line with what Garfinkel calls the sex status. The sex status occurs in highly ceremonialized occasions, and is a temporary and playful variation of what the person can be.[15] The sex status is culturally induced, and can be played with when appropriate, while the alleged true natural gender is invariably separated from it.

Similarly, God in the modern adaptation becomes a human construction and acts as the externalization of normative judgement. In ethnomethodological terms, he acts as the “method of social inquiry.”[16] This means that God decides the harm and its extent, the allocation of blame and a remedy. Because of this, he is part of Latour’s purification process as the fourth guarantee of the crossed-out-God lets him be part of nature or part of culture. God can be the natural providential power, while also being a culturally constructed God. He is therefore transcendent and yet immanent. He is removed from “the dual social and natural construction, while leaving him presentable and usable nevertheless.”[17] Being the figure of social inquiry enables him to be natural as well as cultural, and yet separate.


Conclusion
Following Latour’s critique of modernity, we have seen that the trans-medial Everyman mediates the paradoxical relationship between translation and purification. This mediation is indicated by the red oscillation in this diagram. 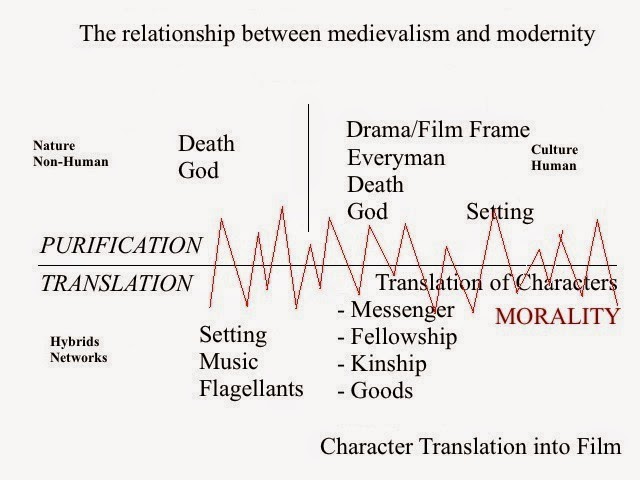 Translation and purification remain distinct, just the way Latour intends modernity to be understood. The modern constitution, and its four guarantees, however, are not successful in preventing oscillations, thus indicating our failure in being wholly modern. The constant switching between transcendence (nature) and immanence (culture) thus creates a space of discourse that “happens in the middle, everything passes between the two.”[18] You see that I have called this oscillation morality on my diagram, because I think that the result of this oscillation is the underlying moral of the play: in one instance the moral of Everyman is that of a Christian ontology, while just an instance later, it changes into the moral of a secularized ontology, in which the rule of living a good life is still just as valid.

In the context of modern adaptation of a medieval morality play, the mediation between translation and purification is realized through the fourth guarantee of a crossed-out-God, allowing modern “men and women could be atheists even while remaining religious.”[19] This is probably why modern students kept the figure of God as the embodiment of normative judgement. God was removed from the religious context and would be accepted by the audience as an authority nevertheless, by reinterpreting Christian theology and bringing his immanence and transcendence into play at the same time.[20] As “the all powerful God could descend into men’s heart of hearts without intervening in any way with their external affairs,” the moral of the good life is inherent and metaphysical, even to the students of today.[21]

[1] As a contribution for the Beyond Borders Arts History Blog, this paper will only focus on a small number of examples from the theater adaptation. The translation process focusing on the adaptation from medieval play into film, as well as the process of purification highlighting the film and theater frame of the adaptation will not be included.
[2] Cp. Garfinkel, Studies in Ethnomethodology, 11
[3] Latour, We Have Never Been Modern, 10.
[4] Cp. Latour, 10.
[5] Latour, 10.
[6] Cp. Latour, 11.
[7] Latour, 30.
[8] The relation here is that, if nature is not made by or for humans, it becomes transcendent, while culture, if only made by and for humans, is immanent. (Latour, 30) Latour takes immanence to mean ‘the inherent, the inner dwelling,’ from “immanere - to reside in.” (Latour, 128) Transcendence opposes immanence, as it defines the state of being independent of the universe, the state of being beyond. In the model of Modernity, immanence and transcendence create a tension.
[9] Firstly - men don’t make nature, nature has always been there / secondly - only humans construct society / thirdly - a separation of the natural and social world, as well as the separation of hybrids and purification. And lastly, the crossed-out-God, his removal from “the dual social and natural construction.” (Latour, 30 - 32.)
[10] Latour claims that modernity would be fine by itself as an entirely secularized ontology with no room for transcendence. Nevertheless, modernity produces an immanent transcendence, a form of globalized network that creates the ‘beyond’ of our social constructs of our own nature, and the nature of society. The oscillations mentioned therefore work against modernity as, “the transcendence of Nature will not prevent its social immanence; on the other hand, the immanence of the social will not prevent the Leviathan from remaining transcendent.” (Latour, 32)
[11] Allegories are the hybrids because they already are a mixture of something human and non-human. Take the grim reaper for example, he is represented as a man with a scythe, something very human, and yet he symbolizes death, something that obviously transcends the human sphere of experience.
[12] Garfinkel, 213.
[13] Cp. Garfinkel, 36 - 37.
[14] Garfinkel, 36.
[15] Garfinkel, 116.
[16] Garfinkel, 104.
[17] Latour, 33.
[18 ]Latour, 37.
[19] Cp. Latour, 33.
[20] Cp. Latour, 33.
[21] Latour, 33.


Irena Berovic is a medievalist with a special interest in Old and Middle English literature. She completed her BA degree in English Literature and Linguistics and her MA degree in English with a focus on "Medieval Foundations of Modern British Identities" in 2012. Since then, Irena has been working on her PhD thesis at the Heinrich-Heine-Universität Düsseldorf, Germany, where she is currently also working as a research assistant, teaching Old and Middle English literature in the BA English program.