A Magic Bowl for Love and Prosperity: Part I 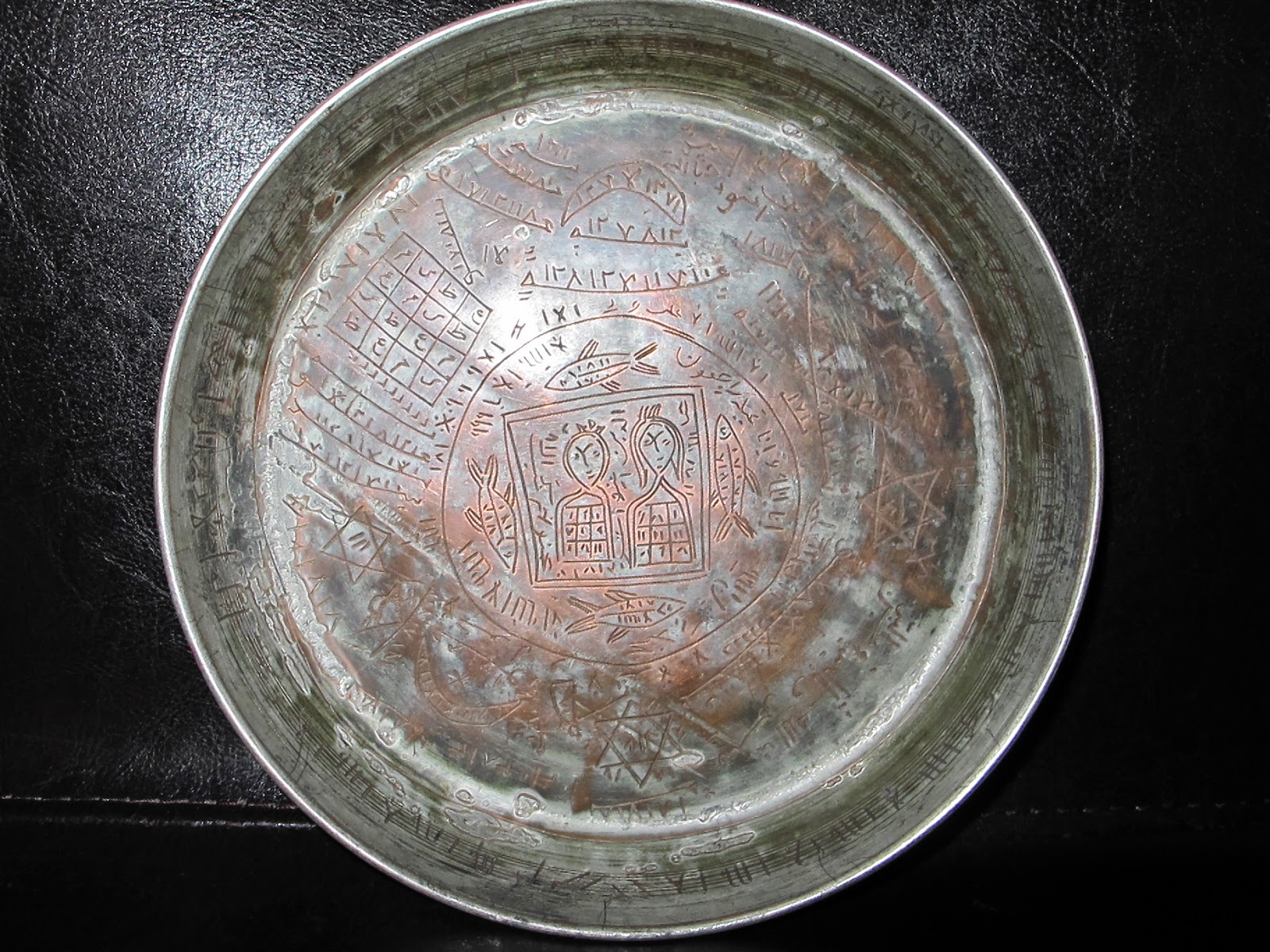 With regard to the apotropaic efficacy of objects within the Islamic culture of esoteric beliefs and practices, the magic bowl occupies an interesting space. It bears many visual and textual similarities to portable amulets and talismans; however, it is not carried with a person on a day-to-day basis, but instead is used in particular instances for a specific purpose.[i] Emilie Savage-Smith’s interpretation of the Islamic magic-medicinal bowls within the Nasser D. Khalili Collection has provided the current academic discourse on Islamic amulets, talismans, and other ‘magical’ objects an indispensable examination of the textual and visual components of Islamic magic-medicinal bowls.[ii] Even though her analysis focuses upon magic-medicinal bowls, its interpretations may be used to address the significance of the other types of Islamic magic bowls because many of the inscribed elements she examines can be found on other apotropaic objects.

Recently, I had the opportunity to examine an Islamic magic bowl supposedly created for love and prosperity. The bowl was made in Iran and likely can be dated to the pre-Modern time-period. The object is comprised of a myriad of sigils, magic squares, and partially inscribed Qur’anic verses. The purpose of my analysis was to interpret the bowl’s intended functionality through an examination of its aforementioned attributes as a means to contextualise it within the arena of the current corpus of scholarship concerning magic-medicinal bowls. Within this post, I will discuss one aspect of the magic bowl, the Seal of Solomon, which only occurs three times within the illustrative programme of the bowl, but is significant nonetheless. 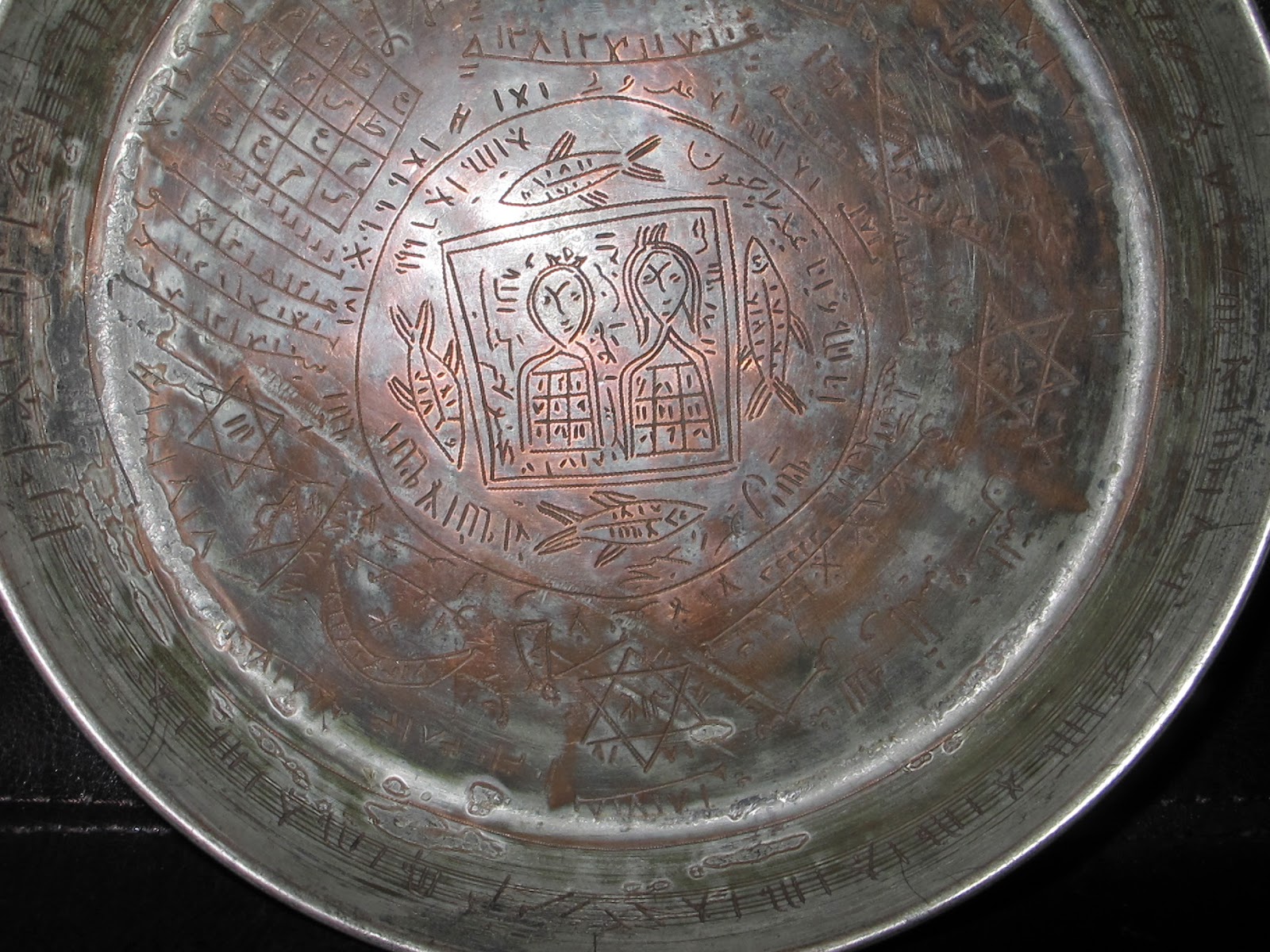 In the general tradition of magic, the Seal of Solomon along with the seals of various other prophets are commonly found on amulets and talismans.[iii] When the Seal of Solomon and the other prophetic seals are inscribed together, they are believed to “represent the mysterious name and the seal of the Almighty.”[iv] However, the Seal of Solomon may stand-alone and is often illustrated as a star in the shape of a pentagram or hexagram.[v] Within geometric symbolism, the hexagram and pentagram represent a cosmic expression of  “heaven and its reflection on earth, the divine and its reflection in creation and of the connection between heaven and earth, between the macrocosm and the microcosm, and between spirit and matter.”[vi] This reference to divinity and creation is reminiscent of previous discussions about the juxtaposition of the square and the circle, which Emily Tuttle has touched upon within her work and contributions to Beyond Borders and is something I will further elaborate upon within part II of this series. 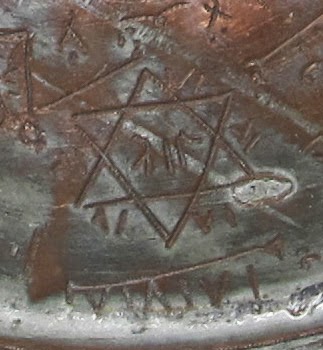 Aside from geometric symbolism, the seal contains religious and cultural significance as well. Within Islamic tradition, the hexagram is believed to be the sign of King Solomon and in Judaism, it is the Shield of King David.[vii] According to Gershom Scholem, the six-pointed star did not originate as a symbol of the Jewish monotheistic faith, but rather it was bound in magical traditions and used for talismans and amulets to protect against evil spirits.[viii] Within the Jewish, Christian, and Islamic traditions, Solomon was thought to have magical powers that could control or exorcize demons and other spirits.[ix] Scholem further states that the “Arabs” showed tremendous interest in the occult sciences and that the name, ‘Seal of Solomon’, originated with them, but was inspired from the Jewish legends of Solomon’s dominion over spirits along with his ring that had the “Ineffable Name” engraved upon it.[x] E.A. Wallis Budge suggested that Muhammad sanctioned the use of inscribed amulets and, through the Qur’an, passed on to his followers the history of Solomon as a magician and the emphasis of the apotropaic qualities that the names of Allah held.[xi]

However, with this succinct inquiry into the seal’s possible relevance, the question remains as to why this symbol was incorporated into the illustrative programme of this particular magic bowl. One may postulate that a belief in the magical abilities of Solomon along with knowledge of the seal’s geometric and symbolic significance may have been an impetus for the creator of the magic bowl to incorporate the Seal of Solomon within the magic bowl’s magical and textual program in order to enhance the bowl’s potential efficacy. However, this, for now, must be left for further analysis especially with regard to the seal’s juxtaposition with other inscribed aspects of the magic bowl, which shall be discussed in part II.