In my research and indeed career I want to question how medieval pieces of art interacted with their audiences. I'm being very exact when I write this. I want to know how Artefacts effected People. Fabian's last post on OOO theory and Shandra's discussion on the ontology of the manuscript are great introductions to similar themes and I will not repeat them here. Yet, how might artefacts interact with their audiences? In looking at the tomb of Elen Gethin, a fifteenth century Welsh noblewoman, we can begin to see how this might happen. 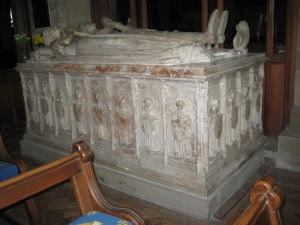 Elen Gethin was born sometime in the early to mid-fifteenth century to Cadwgan ap Dafydd. Elen thus appears to be of Welsh descent and would further marry into the Vaughan family, gentry of Tretower and Hergest placing her husband’s land in the eastern Wales and Herefordshire borderland. Thomas Vaughan, Elen’s husband, was associated with the Stafford lordship of Huntington near his residence in Hergest. In 1461 Edward IV appointed him receiver of Brecon, Hay, and Huntington. [1] Elen would go onto have four children: Watkyn, Richard, Roger, and Alice or Elizabeth who would go onto marry Robert Whitney. Elen would become a widow in 1469 when her husband Thomas was killed in the Battle of Edgecote and entombed in Kington church, near their home in Hergest. Elen would eventually commission an elaborate tomb for her husband and herself, even gaining an indulgence for any who prayed for her husband’s soul. The Vaughan family would continue to support Welsh poets and the Hergest Court would eventually find the Red Book of Hergest in their possession after Hopcyn ap Rhys ap Hopcyn seeded it to the Vaughans of Tretŵr in 1465. [2]


And yet, both Elen Gethin, or Elen 'the Terrible' as her name is translated from the Welsh, along with her husband, are both maligned in folklore. Looking at the primary sources, the reason Elen is named Gethin is not explained. Indeed, her name simply appears as Elen Gethin in Welsh court poetry. Additonally, while being 'the terrible', Elen is never ridiculed, censured, nor praised for her strange title. Along with Elen's strange name, she is said to have killed her uncle or cousin in an act of revenge for her bother's murder, mainly in T.J. Llewelyn Prichard’s The Heroines of Welsh History. [3] However, Thomas Vaughan almost receives a worse fate by being conflated with a devilish figure who appears in the shape of a black dog, called the Black Vaughan. Yet, this spectral dog motif is hardly unique to Herefordshire.


Theo Brown’s work on the spectre of the black dog in folklore across the British Isles and Ireland is a testament to the wide-spread nature of the black dog phenomenon. ‘The Black Dog has perhaps mire vitality, and survives in more localities, than all the apparitions that in the olden times were sworn to by persons of the highest veracity.’ [4] Brown describes the various types of spectral dogs, from ghostly sights in the distance to aggressive ghosts which sometimes appear headless. Indeed, while the black dog’s form is the most common, some of the varieties of this spectre can more rightly be called shapeshifting spirits which simply prefer a dog form. Brown even goes onto recount a tale in which a black dog is killed and buried in a churchyard to create one of the more beneficial forms of the spectral dog. Brown’s work on this strange sight seeks to place these events into the greater narrative of Celtic as well as human history. Indeed Brown’s research appears anthropological. Yet, what I would like to emphasise is the relationship between churches, spectral dogs, and Elen and Thomas Vaughan’s tomb. At the foot of Thomas’s effigy a dog is rendered in the marble. While speculative, perhaps what we are seeing with the Black Vaughan is an instance of a pre-established folktale. While it cannot be explicitly proven that the stories of black dogs came before the Vaughan tomb, the connection between a common piece of folklore and a piece of funerary art which displays a dog is striking. As the Vaughan’s do not appear to be any more violent or peaceful than their neighbours, the wickedness of the Black Vaughan could simply be a conflation of folklore with local sights. When one considers the strange tale of Elen Gethin’s revenge, perhaps what we are seeing is another piece of folklore which sought to give the devil figure of this Black Vaughan and equally ‘terrible’ wife.[5]

When thinking about art, it's important to consider its potential reinterpretation and the historical importance of this. Additionally, this should not be seen as a negative. Indeed, the tomb of the Vaughans could be seen as actively engaging with local myths. While it's impossible to determine which came first, tomb or tale, the tomb of the Vaughans is a piece which influences and is influenced by local folklore. These are the moments which excite me as an art historian; when the art work no longer is a dormant piece but literally takes on a life of its own.