Turning the visual stereotype into an object

First and foremost I have to say that this post is not going to make an argument, as it does not have a fixed point that I want to make. Instead it is rather a reaction to my most recent (and not yet finished) readings on Object-Oriented Ontology (OOO) and the attempt to link this to my own point of interest. And like my reading, these thoughts are only at an early stage at the moment and probably speculative and somewhat experimental.

This being said, I have begun to wonder about the potential OOO bears to my own thinking and my own studies. With regards to my interest in the depiction of the Other, the obvious answer would be reconsidering objects bearing images of the Other such as manuscripts, maps or stained glass windows and considering them as agents in their own right. Though this consideration appears to be valid enough, I have been more enticed to contemplate the use of an OOO perspective for something that is abstract in its own right. The stereotype itself. Could we we consider the different stereotypes that came to being in the course of human history as objects? As 'invisible' objects, manifested in imagery, in writing? And more importantly, would this perspective on stereotypes expand our learning of the material?

Born in the discourses of identity, religion, politics and many more, every stereotype soon would outlive his parents. Different from its creators, the stereotype, however, is very resilient to death, it continues, adapts and evolves from generation to generation. 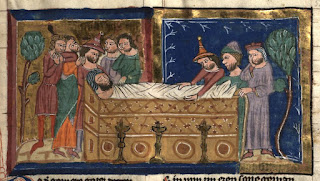 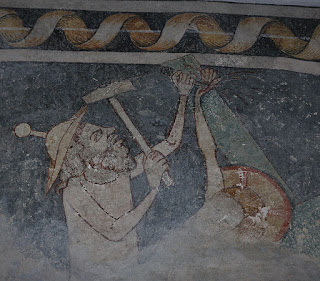 So far the most extensively studied Other of the Middle Ages is probably the Jew, or maybe rather, the 'hermeneutical Jew' to use Jeremy Cohen's term. The 'hermeneutical Jew' is a Christian concept that is not related to actual medieval Jewish populaces. The Christian image of the Jew in the early Middle Ages is primarily related to an Augustinian reading of the Jew as an acceptable and necessary part of the Christian world. As witnesses of Christian history, the concept of the Jew did not yet bear  the aggressive stance that developed in the beginning of the late 11th century. It was during this later periods that the Christian concept of the Jew took on the form of the murderer of Christ, enemies of Christendom, and associates of the devil himself.

Now, this is a rather rough sketch of the (or part) of the development of the portrayal of the Jew as the Other, however, I hope it suffices as an illustration. If we consider to ascribe agency to these stereotypes, the view we have on their developments may show changes in comparison to the traditional perspective. The image of the Jew stops being a concept developed by Christian society, being reinvented, changed. It abandons passivity. The stereotype itself becomes an active force in the discourse. The changes experienced by the image of the Jew suddenly are not so much results of the influence of contemporary social/theological/political and economical developments on the old concept. Instead these changes are due to a dialogue between the concept of the Jew and the social discourses. All of them taking part in shaping one another. In this instance, man does not change the concepts, but the concepts and man change each other. All active participants in a mutual development.

However, I do have do wonder, if there is possibly some danger in considering the stereotype/stereotypes as objects, as agents? I cannot help but think that this perspective also gives room for apologetics. Suddenly the human becomes a victim of the agency of the stereotype, A mere recipient, a locus of of manifestation for the stereotype, seemingly freeing the human of his responsibility and even free will. Yet OOO itself points out the falsity such an argument would have, after all there is no real passivity, the recipient is always an active agent in the act of translation, therefore far from free of responsibility. The application of OOO on the image of the Other, it appears, is an act that demands responsibility of the scholar in order to avoid the pit traps it bears regarding the material.

The stereotype as agent, therefore brings about the potential to present a new framework to consider the image of the Other, by viewing certain stereotypes in a larger context and as manifestations of a metaphysical agent that we can only see in its manifold physical translations. But is there anything to gain from this perspective? Anything new we can learn? Or is it just a new intellectual exercise for the inhabitants of the Ivory Tower to enjoy? To be honest, I am not entirely sure just yet, but it remains something I have to think about during my deeper journeys into OOO.