Of gender, scribes and academics

A number of the most recent posts on our blog have been concerned not only with women, but with women who were agents of high cultural productivity in the Middle Ages. I have been very glad to read about these cases and more so about the fact that the idea of writing medieval women does not seem like an anachronism anymore. It also made me consider how the scholarly discourse on any given topic is not exempt from preconceived ideas and how they may obstruct the way for new ideas and findings. To illustrate this point I have chosen the example of the scriptorium of the Cathedral in Essen, in the area that is today known as the Ruhr Area, in Germany. Recently, this area has experienced a transformation from the industrial to the commercial, from smoking chimneys to no-smoking signs. Despite being highly defined by the industrialisation period, the Ruhr Area’s roots go back to the Middle Ages. One of the most well known parts of its history is the Cathedral of Essen, which was used as the church of the Essen Abbey until the convent became secularised in the beginning of the 19th century. This convent of women, often from a noble background, was established in 845. 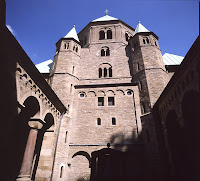 It became not only a centre of learning for women, but also played an important role in disseminating Christianity. However, I do not intend to give a full historical draft of the convent, but instead, I will point out one particular development from the 9th to the 10th century when the Abbey was not only home to numerous women, but also to an established and highly productive scriptorium. We owe this recognition to Katrinette Bodarwe, who gave convincing evidence for the scriptorium's existence by a comprehensive palaeographic analysis of all the surviving material. Its beginnings in the 9th century (first evidence dates from 874) can only be asserted with difficulty, especially as a fire in 946 destroyed part of the collection. However, shortly after the fire, in the second half of the 10th century, the scriptorium bloomed and became more productive as ever before, and as it would ever be.1

This might have been due to the pure necessity of re-establishing the library collection after the fire. However, it is also possible to see a connection to the highly active abbess of the abbey: Mathilde II, granddaughter of Otto the Great. Evidence shows that the Ottonian Abbess went beyond the general organisation of the daily life of the abbey, she established contacts from Rome to England and was patron to artefacts as the famous Otto-Mathilde Cross. Furthermore, the scriptorium also had its most flourishing phase during her reign. After the fire, the scriptorium did not only produce manuscripts for the basic needs of an abbey. Instead, evidence suggests that the scriptorium additionally worked on creating an extensive collection. The manuscripts that were created in the scriptorium of Essen in the second half of the 10th century are of a wide variety of texts, from liturgical to classical texts, many of which go beyond what would have been considered a necessity for the abbey. One might speculate here, that it was also one of Mathilde's political aims to have the abbey become a centre of learning under the Ottonian rule, an aim that was unfortunately not pursued by later abbesses.2

However, my point here is neither to give a full account of Bodarwe's finding on the existence of the scriptorium in Essen nor to speculate about the role the Abbess might have had in its blooming, rather I want to point out that Bodarwe's argument, though generally accepted widely, also met resistance in the scholarly sphere. As important as the criticism of every new finding is, it struck me as interesting how estranging the argument for a female scriptorium in the early Middle Ages seems to have been at the beginning to some. And to my knowledge it is not the only case where the culturally productive medieval woman is met with resistance. For example, the nun and poet Hrotsvit has been discussed with regards to questioning her authenticity, and the actual gender of the author. Does an early medieval female author or female scribe bring unease to the established image of the medieval woman? The image of the past role of the women seems to need as much liberation of preconceived ideas as women of more modern times needed and unfortunately still need. And while without a doubt, new scholarship needs to withhold the 'hot seat' as much as the old, it seems noticeable that certain theories get called more into question than others. An older academic, not without recognising the irony, noted to me that the idea of writing an art historical PhD on pipe cleaner estranged him as much as his own thesis probably estranged others when he wrote it. It makes me wonder whether this is the normal circle of life within the academic discourse. Each field does constantly get expanded, reinvented, rediscovered, however, does this by necessity mean that the old cannot embrace the new? Is the estrangement unavoidable? I'd like to think not, but who knows what I will say one day about the most recent developments and position I will take towards new theories. Will I embrace the questioning of established images or will I rush to their defence?