Dome of the Rock: A Multi-Cultural Cosmological Symbol 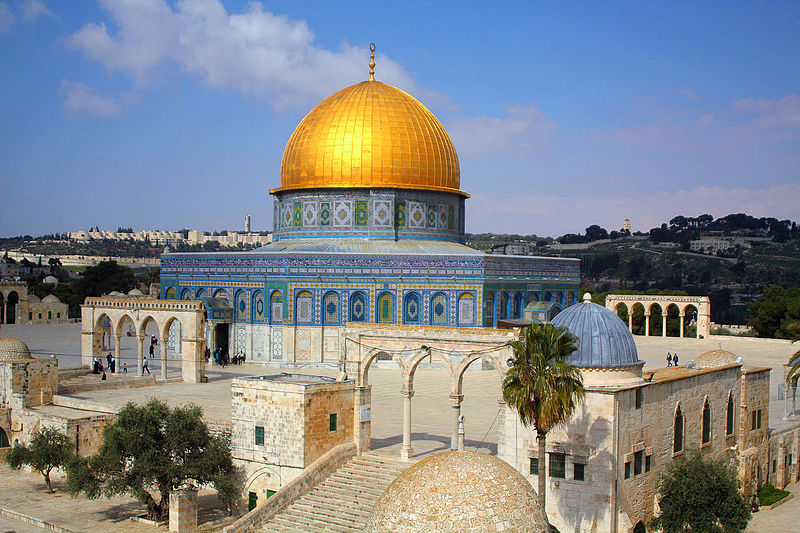 Though Dome of the Rock is a Muslim holy site, the location has served as a place of worship to Jews, Romans, and thirteenth century Crusaders. Having had several cultures present at the site allows for multiple interpretations of the religious, geometric, and cosmological qualities of the building. This abbreviated analysis of Dome of the Rock will include an examination of the octagonal shape of the building, the floor plan, the spherical dome, and the potential meanings behind each feature. A study of these features shows not only an exchange between the cultures that resided on the historic esplanade of Temple Mount, but also a translation of scientific and religious material from several centuries and societies. The Muslim interpretation of these geometric qualities will primarily be deliberated, but as the features are borrowed from earlier buildings and ideologies, an analysis from other cultural perspectives is also necessary to fully comprehend the possible religious and scientific philosophies represented in geometric forms.

Dome of the Rock was created to promote the triumphant rule of Abd al-Malik, who began construction in 690 CE.[1] Prior to the architectural accomplishments of Malik, Temple Mount was home to a structure created by his predecessor, Umar.[2] The wooden structure of Umar was overshadowed by the Christian building below Temple Mount, the Church of the Holy Sepulchre.[3] With Islam on the rise, Malik’s empire required a building of grandeur and beauty that would compete with his rival rulers. Malik’s design incorporated Christian architectural features which were translated into Islamic symbols upon completion. The most notable borrowed form is the octagonal shape of the building, comparable to SS Sergius and Bacchus in Constantinople (526-37 CE) and San Vitale in Ravenna (526-47 CE).[4] The Christians' use of the number eight makes reference to several biblical events.  Firstly, the number eight could make reference to God creating the world. The Bible records in Genesis that the world was created in seven days, and the eighth day was the first day of celebrated life.[5] Genesis 21:4 also alludes to the number eight, stating: ‘When his son Isaac was eight days old, Abraham circumcised him, as God commanded him’.[6] Christ’s eternal divinity is also represented in the number eight turned on its side, creating the symbol for infinity.[7] Eight-sided Christian baptisteries are also common, perhaps making reference to the mass flooding of the world where Noah rescued eight people on his Ark.[8]

These Christian beliefs were likely overlooked by Malik, who preferred the use of geometric forms in iconoclasm and as a representation of balance. This idea is supported in Oleg Grabar’s analysis of Dome of the Rock, where he reveals that the octagonal exterior was used for the creation of a geometrically sound interior.[9] This geometric perfection was revealed in what was thought to be an imperfection, the non-symmetric locations of the columns within Dome of the Rock.[10] According to Grabar, ‘the sets of columns in the circular arcade are not symmetrical but are a few centimeters off from what their geometrically correct location would have been.’[11] The column placement is reaffirmed when consideration is given to a layout based on two crossing squares (see image, red lines).[12] This same scheme is used in the design of the dome (see image, blue lines).[13] K.A.C. Creswell, an architectural historian, was the first to realize the geometric implication of the layout.[14] 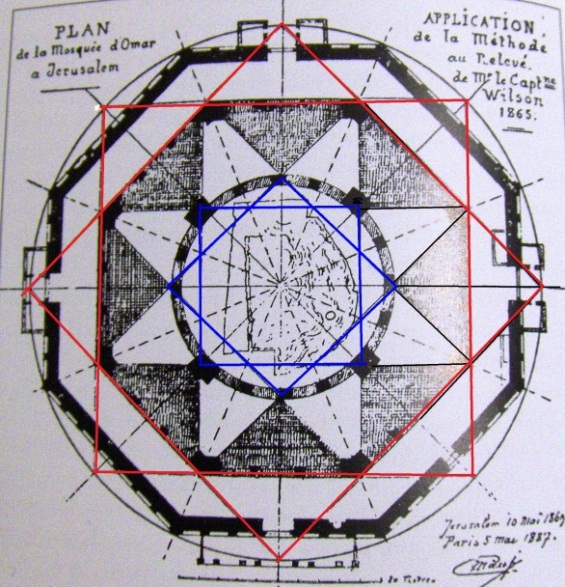 The crossing of the two squares is the Seal of Solomon.[15] It is geometrically sound as the squares are identical, overlapping at a forty-five degree angle.[16] The use of squares is as equally accepted as the use of triangles, creating the six-pointed Seal.[17] The use of the Seal of Solomon within the layout is representative of the Jewish, Christian, and Muslim presence at the site.[18] The use of the Seal in the design encourages the idea of a former palace or throne having been on the esplanade, but it may also serve an apotropaic function. The Seal originates from a design on a ring, given to Solomon by God.[19] The ring was meant to give Solomon the power to defeat the evils of Djinn, wicked spirits.[20] Evidence for the existence of this ring is sparse, but the use of the design at Dome of the Rock may have been in hopes to absorb the same powers the supposed ring possessed.[21] The repetitious use of the Seal in the creation of the dome and the layout signifies the Islamic appreciation for geometric perfection, and emphasizes the importance of this particular symbol in the Arab community. With the mix of cultures that have been present at Dome of the Rock it is difficult to pin point whether the use of the Seal is for geometric aesthetics or in honor of Solomon. It is perhaps best to assume that both the mythical event and the geometric pattern were of equal value being that the Seal allowed the wearer to control the elements of the spiritual world, while the pattern emphasizes balance and the coexisting of opposites much like the Chinese yin & yang.

The use of the star pattern could also be a Christian symbol of Heaven, making the building a star fallen from the celestial realm. The dome is representative of the firmament, the divider between the waters of Heaven and earth. The firmament is described in Genesis 1:6-8 with God having stated,

The roundness of the firmament was also considered by Ptolemy, Aristotle, and Copernicus, who used this concept in the creation of a spherical universe, with the outer most layer containing stars.[22] With this in mind, it could be suggested that the dome of the structure is the biblical firmament and the eight-pointed star represents the stars as placed by the Greek philosophers. If the number eight is once again considered as a reference to infinity, the placement of the geometric star could be understood as the infinite existence of heaven, or 'paradise', which could also be hinted to in the iconoclastic choice of lush foliage mosaics on the interior walls. 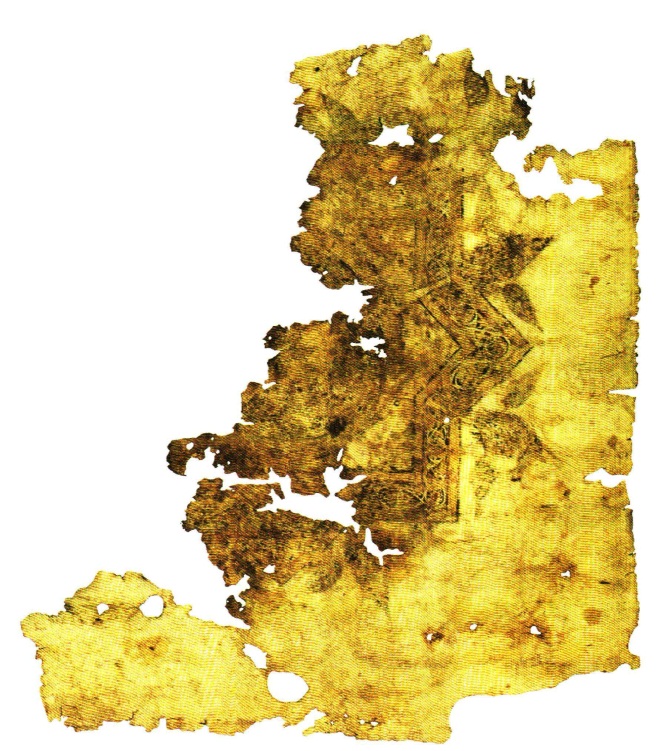 Dome of the Rock’s floor plan has more recently been examined in drawings by Alain George of the University of Edinburgh. His geometric analysis, which was used to compare Dome of the Rock to the third manuscript page of the Sanaa Qur’an (right), embraces the geometric pattern known as The Breath of the Compassionate (below on the Sanaa Qur'an and the Dome of the Rock floor plan).[23] This name was given to the pattern by the Great Master Ibn al-Arabi (1165-1240), who used this design to depict the creation of the universe through the unity of the elements.[24] The four elements are exemplified in each corner of the crossing squares, the four circles, and the four legs of the cross created in the center.[25] The number four is also symbolic of the four seasons, and the four cardinal directions which are represented in the four entrances of Dome of the Rock.  The four seasons are of importance because the number twelve is also prevalent in the design. Twelve columns circle around the Rock, perhaps as a representation of the twelve months of the year, a number designated by the zodiac. Therefore, since the geometric pattern embraces the concept of the elements, the calendar, and mythical stories of Creation, it is an idyllic Medieval representation of the cosmos. This pattern is also most mandala-like having included the use of both circles and squares. 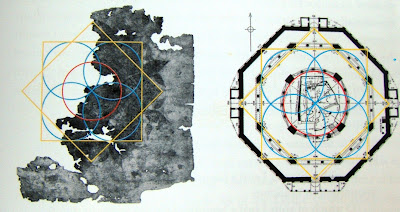 This analysis is a fraction of the story. So what is the meaning behind the geometry at Dome of the Rock? I believe there may be connections to Sumerian and Babylonian cosmology as well, but all theories are speculative as there is no primary documentation that makes a direct reference to sacred geometry within the architectural layout. It is possible that centuries of exchange of religious and scientific ideologies were documented, and perhaps were in the hands of Abd al-Malik at the time of construction, allowing for today's scholars to make cross-cultural analyses of the design. What we are left with is a multitude of theories from varying cultural backgrounds, perhaps making Dome of the Rock a true 'navel of the world' as suggested in medieval T-O cartography.

Email ThisBlogThis!Share to TwitterShare to FacebookShare to Pinterest
Labels: Apotropaic, Breath of the Compassionate, Dome of the Rock, Eight, Infinity, Navel of the Earth, Seal of Solomon