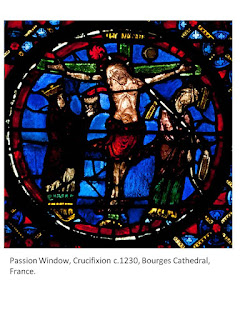 Synagoga and Ecclesia first appeared in the ninth century in Northern France and Southern Germany, where they were intended as representations of the Old and New Testament and personifications of Judaism and Christianity, respectively. Through their depiction in carved ivory panels, to stained glass windows and manuscript illuminations, the figures developed a distinct iconographical tradition, which featured prominently in the pictorial arts, contemporary drama as well as in Christian theology, appearing in commentaries, exegesis, and sermons.[i] For example, Ecclesia and Synagoga were the main actors in Pseudo-Augustine’s sixth century Sermo Contra Paganos, Judaeos et Arianos, (Sermon Against Pagans, Jews and Heretics) as well as central figures in the twelfth- century exegetical sermons of the French abbot, Bernard of Clairvaux.[ii] The ubiquitous presence of the figures in medieval art and literature makes it almost impossible to engage in medieval studies without coming across Synagoga and her Christian counterpart.[iii]

Any discussion of the figures must begin with a description of Synagoga and Ecclesia’s traditional iconography. In order to do so, it is perhaps best to turn to, what is acknowledged as one of the most celebrated examples of the motif; the south facade of Strasbourg Cathedral.[iv] 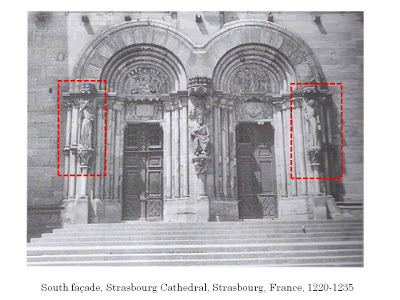 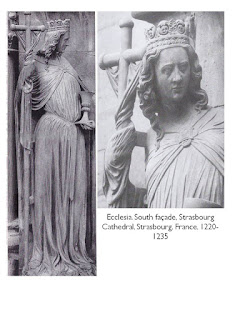 On the right of the facade is the regal Ecclesia. Adopting a powerful stance, her legs are set wide apart as she throws her shoulders back in an upright posture. The heavy drapery of her robe gathers in orderly folds at her feet and she is the image of might and stability. Every movement of her body appears decisive and controlled as she tightly grips a cross in her hand. A crown sits firmly on top of her head and identifies Ecclesia as a ruling Queen. No aspect of Ecclesia’s appearance communicates inertia, uncertainty or any other weakness. Her power and strength are absolute. 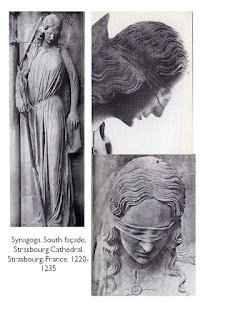 Standing across from Ecclesia, to the left of Solomon, is the figure of Synagoga. Although her beauty matches that of Ecclesia, unlike her counterpart Synagoga is the image of weakness and defencelessness. Her stance is weak and she is hunched over. Her movements seem uncertain and she appears to be slipping out of the design, with her elbows protruding beyond the facade. The drapery of her robe falls in a muddled pile at her feet, giving the impression that she may trip over it. Her frailty is further emphasised by the blindfold tightly wrapped around her eyes which represents the Jews inability to see Christ as their true Messiah. In her hand she holds the tablets of the law which are slipping from her grasp and tangled up within the holds of her robe; symbolising the Jewish attachment to the now obsolete Old Law. Like the broken staff in her hand, Synagoga looks damaged and defeated. She is isolated and turns away from the rest of the facade. Her only symbol of power was a crown, which is no longer visible, located at her feet.  It suggests Synagoga is the overthrown Queen who was once powerful but whose time has now passed. [v]

Together, Synagoga and Ecclesia represent the contrast of defeat and victory; of subordination and power and of despair and hope.[vi] This opposition of conquered and conqueror was a defining feature of the motif from the eleventh century onwards and creates a powerfully dramatic but also highly enigmatic image which begs further investigation.

In light of her omnipresence and striking appearance, it is not surprising that since the late nineteenth century Synagoga’s flimsy beauty has inspired a wealth of literature and numerous interpretations.[vii] One of the earliest studies of Synagoga was carried out in 1894 by Paul Weber. His fundamental text Geistliches Schauspiel und kirchliche Kunst (Religious Drama and Church Art) studied the relationship between pictorial representations of Synagoga and her depiction in medieval drama.[viii] Weber’s study viewed the figure as the embodiment of medieval anti-Semitism. He concluded that despite the figure’s beautiful appearance, like the deformed male Jew of Christian art, Synagoga condemned medieval Jews. Therefore initially the figure was seen as a further manifestation of Christian anti-Semitism, reflecting the writings of the Church Fathers, such as John Chrysostom, who condemned the Jews and accused them of immorality and madness.[ix]

This negative interpretation of Synagoga was questioned by Wolfgang Seiferth. His text, Synagogue and Church in the Middle Ages: Two Symbols in Art and Literature, reached a more ambiguous conclusion.[x] Studying the development of the iconography of Synagoga, from the ninth through to the fifteenth century, he concluded that due to the allegorical nature of the figure it denies any concrete definition. Seiferth traced the use of the female allegories or personification to Classical Antiquity when female allegories would often be used within a historical context to represent ideas which they did not literally represent. [xi]  Using the example of the two female personifications of conquered lands depicted on the armour of the statue of Augustus at Prima Porta, Seiferth shows how multifaceted an allegory could be. Building of the argument that the meaning of the personification is volatile and strictly dependant on the context in which they appear, Seiferth concluded that when removed from the initial context the female personification could stand for anything.

This interpretation draws from the classical understanding of the function of the personification as presented by Morton Bloomfield, who stated that the connotations of a personification are not determined by what it represents but the predicates that are attached to it.[xii] As such Seiferth presents Synagoga as a far more complex figure which reflected the dual nature of Judaism in medieval Christian theology.[xiii] While the Jews were accused of deicide and condemned they were also acknowledged as God’s first chosen people. This can be seen in the writings of the French abbot Bernard of Clairvaux who adopting the fourth century ideology of St Augustine stated, ‘slay them not least my people forget.’[xiv] He believed that Jews should be protected as they are living relics of the Old Testament, and their conversion is a condition of the second coming of Christ. Thus he presented the Jews as playing a vital role in the past and future of Christian salvation history.

For Seiferth, Synagoga’s allegorical nature could accommodate the various incarnation of the Jew in Christian theology. Therefore rather than interpret the figure as a positive or negative representation of Judaism, he believed that the connotations of the figure were directly related to the specific circumstances of her representation. A similar conclusion was reached by Bernhard Blumenkranz who believed that Synagoga could both condemn the Jews and communicate their position within Christianity and Christian salvation history. However, Blumenkranz believed that the downtrodden appearance of Synagoga, contrasted against the victorious Ecclesia always communicated a sense of subordination and while the figure may not have been a negative representation, it did present Judaism as inferior to Christianity.

Ruth Mellinkoff’s study of medieval iconography supported this conclusion stating that the figures had a firmly established iconographical tradition which was intended on communicating the superiority of Christianity over Judaism. Synagoga’s traditional attributes of a blindfold, slipping tablets of the law and a broken banner all communicate weakness which was emphasised by the contrast with Ecclesia who’s attributes of a crown and upturned chalice are indicative of power.[xv]

These early studies focused on Synagoga and Ecclesia’s iconography in light of the Christian theological conception of the Jews; a conception which at times appears almost schizophrenic. While failing to agree on whether Synagoga was a flattering of damning representation of Judaism, all of these studies concluded that despite her beauty, Synagoga’s dissolute and defeated appearance communicated the secondary role attributed to Judaism in Christian theology.

What these early studies have provided is a solid foundation for the examination of Synagoga. However, there is a limit to how much can be achieved through iconographical analysis which is only examined in relation to Christian theology. Although these studies are a logical starting point, this approach fails to acknowledge Synagoga’s prominence and also the complexity of medieval Jewish-Christian relations. In medieval Christian Europe “the Jew” was not a mystical creature only featured in theology; the Jewish community played a significant role in medieval society and like their Christian counterpart was influenced and shaped by social and political change. Simultaneously, Synagoga was not limited to theological contexts and clerical audiences. Featured on public spaces such as cathedral facades, which would have been visible to Christians and Jews alike, it is necessary to consider the possibility that the figures could have functioned out with the context of Christian theology.

More recent scholarship has begun to take these wider considerations into account. Accepting the complexity of Synagoga’s iconography and the context in which she was displayed, scholars such as Sara Lipton and Nina Rowe are beginning to consider Synagoga’s multifarious nature more carefully. By building on the previous scholarly tradition, Lipton and Rowe are paving the way for a new chapter in Synagoga’s scholarship, whose contribution and significance deserves a blog entry of their own.