Reviewing the landscape of Synagoga’s historiography one can see that all these studies have interpreted the figure in relation to medieval theology. However theological interpretations of the subject would only be accessible to educated audiences who had enough of an understanding of contemporary theology to be able to apply them to the beautiful downtrodden figure of Synagoga.

Taking in to consideration the allegorical nature of the figure and the notion that not all medieval spectators would look upon Synagoga as an abstraction of complex theological ideas, since the middle of the twentieth century, scholars have began to consider how specific contexts could have influenced Synagoga's reception. Most of these studies have centred on the depiction of Synagoga on the south facade of Strasbourg Cathedral which was described in detail in my previous entry. 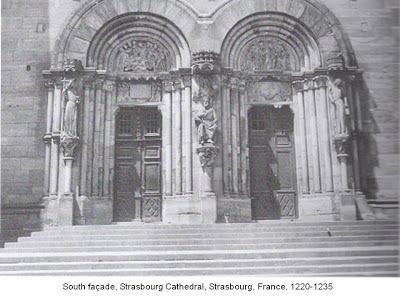 The earliest of these studies were carried out by Adolf Weiss, Adalbert Erler and Otto von Simson.[i] All three of their studies identified the square in front of the facade as the seat of local justice and the site of the local municipal courts. Taking into account this legal context, all three come to the conclusion that the eschatological theme and heavenly judgement depicted on the south facade, would be seen by medieval audiences as a reflection of the earthly judgement of medieval legal practices.[ii] 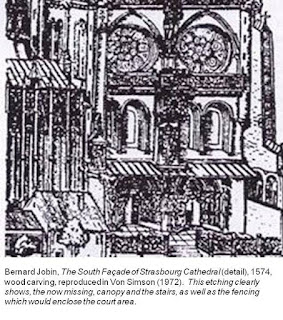 Within this interpretation the victorious Ecclesia and defeated Synagoga, represent the innocent and the guilty parties of the medieval courts. While their presence in the eschatological iconography of the facade can be interpreted as a depiction of the saved and the damned; the innocent and the guilty parties in God’s final judgement.[iii] This conclusion was confirmed by Bernard Nicolai in his 2002 article, Orders in Stone: Social Reality and Artistic Approach: The Case of the Strasbourg South Portal.[iv] Considering  the context in which the Strasbourg facade would have been seen, these studies concluded that within the right context Synagoga and Ecclesia could surpass their traditional roles as the personifications of Judaism and Christianity and depict the two spectrums of Christian morality; the sinful and the righteous; the damned and the saved; the guilty and the innocent.

Although these studies were the first to consider Synagoga as more than a representation of the Christian theological conception of Judaism, they still limited Synagoga to the realm of Christian theology by interpreting her representation within the context of Christian salvation history and the Christian understanding of morality. However two recent studies have gone beyond this theological reading. The first of these was carried out by Sara Lipton.[v] In her article, The Temple is My Body: Gender, Carnality, And Synagoga in the Bible Moralisée, Sara Lipton presented a new reading of the figure of Synagoga. 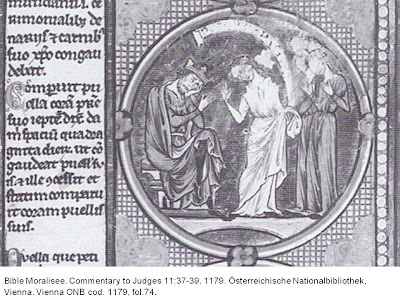 As the personification of the worldly and flesh oriented Old (Jewish) Law, Lipton presents Synagoga as a representation of the material world and examines the connotations communicated by her figure in the thirteenth century, Bible Moralisée which were illustrated Bibles, accompanied by an illustrated commentary.[vi] These Bibles took the form of a novel in order to present sacred texts and were aimed at a courtly audience.[vii]Instead of examining Synagoga in terms of her opposition with Ecclesia, Lipton examines the figure in relation to the medieval rhetoric of gender and through Synagoga’s relationship with male figures in the manuscript. In the commentary to several biblical passages Synagoga takes on various female stereotypes such as the Disobedient Wife; the Seductress ; the mourning Mother and the naive Daughter and the resentful sister. Depending on which of these roles Synagoga embodied, the figure altered from virtuous to sinful; from feminine to masculine to androgynous; from threatening to submissive and was transformed back again.

From this analysis the article comes to the conclusion that Synagoga as a representation of the material does not condemn the body or earthly world but rather reinforces its importance and value. This study re-evaluates the previously held belief that the Middle Ages viewed the material and spiritual world as binary opposites with the former being seen as bad and the later as good. A conclusion Lipton illustrates by considering Synagoga's fate throughout the numerous commentaries.

Nowhere in the commentary or accompanying text is Synagoga condemned or permanently ostracised. She is punished, buried, purged but ultimately redeemed. Synagoga and her corporeal nature are presented not as an antithesis to Christianity but as an integral part of the Christian identity; like women are an essential component of society. Sara Lipton believes that this conclusion is partially dictated by the nature of the Bible Moralisée and its intended audience. As luxurious material goods which were intended to be enjoyed for their material qualities, the Bible Moralisée in which Synagoga appears, praises the physical wealth which formed an integral and growing part of courtly life. Focusing on Synagoga’s femininity Lipton presents the argument that Synagoga’s female body can, in specific circumstances, be a representation of the complex relationship between Christianity and material wealth.

Synagoga’s female body was also the focus of Nina Rowe’s recent studies. Began in a 2008 paper, Idealization and Subjection at the south Façade of Strasbourg Cathedral, and expanded upon in her book The Jew, the Cathedral and the Medieval City: Synagoga and Ecclesia in the Thirteenth Century, Rowe focuses on the appearance on Synagoga on cathedral facades, across central Europe, in the thirteenth century.[viii] Examining the opposition of the weak and beautiful Synagoga against the victorious and mighty Ecclesia, Rowe related the figure to contemporary politics and the social status of medieval Jews. She believes that the figures appearance communicated the imperial position towards the Jews. Under royal decree Jews were protected as their economic activity was vital to the wealth of the kingdom. However, Jews were also considered to be royal property. Attacking a Jew was viewed as a similar offence to attacking the King’s horse. Taking this into consideration, Rowe interprets the Strasbourg, Bamberg and Reims Cathedral facades in relation to the position held by the Jewish community within these cities and concludes that Synagoga communicated the ideal identity and social position of the Jew in thirteenth century Christian Europe;

“she is a servile yet integral member of the Christian milieu. Her beauty marks her as an insider within the ideal Christian system. Her decrepitude ensures her submission...she conveys the virtue of a Judaism that maintains a docile presence within the Christian domain.’[ix]

This study does not present Synagoga as a representation of the theological Jew but rather the medieval Jew; the Jew who would cross the town square, under Ecclesia’s watchful gaze and nod a greeting to his Christian neighbour. Like Lipton related Synagoga to medieval attitudes towards the material world, Rowe interprets the figure in relation to the social position of the Jews in the thirteenth century.

These two studies can be viewed as an indication of the future historiography surrounding Synagoga. Having considered Synagoga’s relationship to Christian theology, scholars are now beginning to examine the figure in relation to the culture which created her. As Rowe stated, “Synagoga is an abstraction,” a creation of the medieval culture. [x]  Consequently, she needs to be examined within the context of medieval Christian Europe and with respect to the contemporary understanding and conception of Judaism and the Jewish community or even beyond the boundaries of Judaism.