The Ballycottin Brooch: An Example of Cross-Cultural Translation 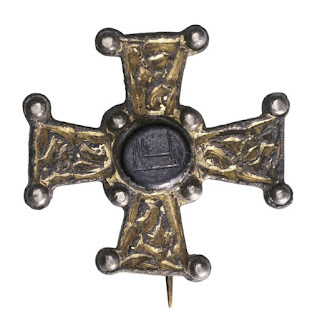 The Ballycottin cross brooch is part of a small world of ornamental anomalies that may mirror the Christian and Islamic ideological traditions concerning the philosophies of magic. It is an amulet that is part of the British Museum’s collection of Arabic and Persian seals and amulets. In 1875, it was found in a bog in Ballycottin, which is located near Cork in southern Ireland. The brooch is composed of a gilt copper alloy cross with a circular black glass inlay. The cross portion, decorated with zoomorphic designs, is stylistically Anglo-Carolingian and the inlayed glass, inscribed with the tubnā lillāh (‘we have repented to God’), is stylistically Islamic. The use of the Christian cross and an Islamic inscribed seal indicate a possible translation between two different cultures of the global Middle Ages. This cross-cultural translation of ideologies was based upon inherent belief systems that, albeit may have travelled to other regions of the world, visually remained true to its origins. The Ballycottin cross brooch is thought to have been manufactured in the Carolingian Empire, but it was most likely made by the hands of an Insular artist who settled within the empire. This artist intertwined the Insular and Carolingian styles to form what is now deemed to be an Anglo-Carolingian style. The Islamic seal was combined with this cross because of an inherent conception of the apotropaic efficacy of the cross as well as the protective attributes associated with the black glass. According to Venetia Porter, the black glass may have been a ‘cheap’ substitution for black jasper, which is of note because during the Middle Ages jasper was thought to have healing properties, carry protective energy and bring good luck to its bearer in both the Eastern and Western worlds.

The inscription upon the glass, on the other hand, is a different matter. The Arabic inscription most likely would not have been decipherable by a Christian, which would make the glass, aside from its value as a gemstone, meaningless. However, the inscribed glass fits snuggly into the space within which it is laid, which alludes to a probability that the cross was fashioned for this particular piece of glass. So, why would this specific piece glass be placed within the cross instead of a non-inscribed section of the same type of glass or stone? I would suggest that the inscription of the stone was recognisable, but non-legible to a non-Arabic speaker. Since there is written documentation of physical encounters between the Christians of the West and Arabs of the Holy Land, it may be supposed that the Arabic language was encountered as well. The Arabs of the Holy Land were considered to be knowledgeable about magic and medicinal cures, and the ingredients needed for such cures were often sought out from territories under Islamic rule. Names of various Eastern ingredients for medicines have been found in manuscripts such as the tenth century Old English list of medical recipes, Lacnunga, and the late ninth century manuscript, Bald’s Leechbook. Since there was a known link between Arabs and medicine as well as various sources of documentary evidence notating the Arabs’ cognisance about magic, some of which coincided with Western beliefs, it may be possible that a Christian artisan who was somewhat knowledgeable about the Arabs would incorporate this inscribed piece of glass within a cross. The coalescence of these two elements would most likely have been based upon an implementation of text as a protective shield in an effort to make a particularly efficacious amulet, especially since both Christians and Muslims used religious text within amulets. The creator of the Ballycottin brooch would not have known if the Arabic text was religious in nature, but it may have been assumed as religious since the text was inscribed on what was interpreted to be a particularly apotropaic gemstone. Hence the Ballycottin cross brooch became a double-layered amulet that encompassed an apotropaism that surpassed the aptitude of one culture by intertwining two cultures together, in a probable effort to make an amulet that embodied the utmost protection.