The Power of Porphyry

While studying at the University of Edinburgh, I have developed an extreme fascination with Cosmati works of art. Several of my colleagues and I made a trip to Rome this past fall where I was able to examine these exquisite works first hand. Although my primary interest in the Cosmati floors are that of geometry and cosmology, I often return to the subject of patronage. Why this pattern? Why this décor for this structure? How did this design benefit the patrons? The answers vary by location, but one quality that was commonly shared amongst the Roman works was the inclusion of porphyry as a material. At the height of Cosmati fashion in the twelfth century, purple had transferred as colour of the emperor to that of the church. Purple had long been associated with those of high ranking as the colour was costly to produce difficult to come by. The use of the colour in both royal clothing and depictions of royals came to symbolize their great wealth. As troubles arose between the emperor in Constantinople and the Papacy in Rome, the colour was then adopted by the Church. This adaptation by the Church suggests perhaps a different royal, the divine king of the Heavens, God. The inclusion of the colour purple in religious art is in homage to God, and serves as a form of propaganda, promoting the rule of the church over that of the empire. This is perhaps best displayed at Santi Quattro Coronati, which houses two Cosmati pavements and several layers of patronal intent. 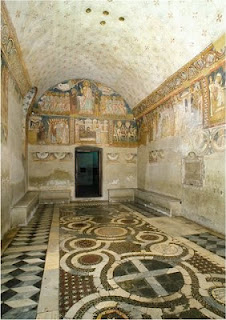 As stated by medieval Rome specialist, Dr. Claudia Bolgia, ‘the Cosmati came in the spirit of antiquity, but also used the material of antiquity in their creations.’ This could not be more true. Spolia was essential in the construction of medieval Rome, often promoting the domination of one cultural idea over another. This is the case at SS Quattro Coronati in the Saint Silvestro Chapel. The eleventh pavement of Saint Silvestro is said to be the earliest structure in Rome in the Cosmati style. The multi-coloured marbles of the floor of course include porphyry, which in this particular case makes reference to the papacy protecting their position against the imperial rule. The Saint Silvestro pavement was perhaps best used as propaganda in following years during the reign of Frederick II. Frederick II had inherited Naples and Sicily in an arranged marriage, allowing him to more easily pursue Rome. By 1220, Frederick was granted possession of Rome by Pope Honorius III. It was not until the papal return to Rome from Avignon in the fourteenth century that the Church regained a prominent place in politics. How is it then that the floor, and the porphyry, served as papal patronal propaganda?

The Cosmati pavement is dated to the eleventh century, but with addition of thirteenth century frescoes, the promotion of the papacy becomes apparent. The floors were funded by Pope Paschal II in his reconstruction of the city. His intention was to promote the papal presence within the community through refurbishment. The frescoes, commissioned by Cardinal Stephan, were added to the chapel in 1247, argued against for the foreign rule of Frederick. The frescoes depict Constantine bowing down to Saint Silvestro, a representation of imperial authority conceding to temporal power. The two artistic works- the pavement and the frescoes- together create a political statement that allows the material porphyry to be fully associated to the papacy. Porphyry is more easily attributed to the papacy over the rule of the emperor when consideration is given to the fact that both patrons were of the church. These patrons firstly made the voice of the church heard through the Cosmati pavement, which included porphyry in a cosmological illustration that is interpreted as a statement of God being the more prominent ruler of the universe, and secondly man. The frescoes second papal authority in depicting an emperor cowering to a church figure. The pattern of the floor and the addition of the fresco to the site therefore allow porphyry to exemplify the power of the papacy.
With this in mind, can purple be considered a colour and symbol of power in all art? Is porphyry the medium of choice because of this interpretation? In the case of Cosmati floors, most often considered a cosmological illustration, I feel the porphyry is representative of the kingly God, but this political propaganda must certainly not be overlooked.
-Emily