‘Advertised’ as the only medieval fortress in Dobruja, the southeastern region in Romania, bordering the Black Sea, Enisala is an extremely rewarding experience, as adjectives like ‘romantic’, ‘glorious’, and ‘legendary’ flood one’s mind at the first visit. If heading north from Jurilovca, one is guided by a corridor of trees and welcomed by the image of the fortress, at a distance, standing tall and proud on a hill whose structure and appearance make the traveller recall Scottish landforms, with a twist of French Provence, in an extremely approachable Romanian landscape.

Seen from afar as an irregular polygonal construction, Enisala had two chambers and walls built of rock (Jurassic lime). With natural defences to the western, southwestern, and northern part, the access to the fortress is via the southeastern wall. The first chamber has four towers and three abutments and was discovered during the archaeological diggings undertaken between 1963 and 1964, while the second chamber was discovered following an aerial picture taken around 1969. It was located to the north of the first chamber and was larger in area. 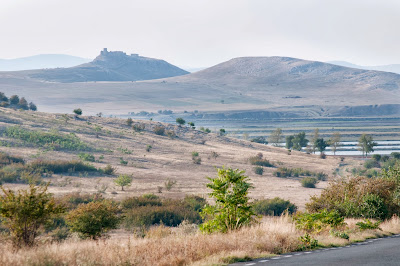 The name of the fortress was formed by adjoining the Turkish word ‘yeni’ [new] and the Dobrujan regionalism ‘sale’ [settlement]. The explanation may reside in the fact that the Turks may have adapted the name of the administrative unit near the fortress, called Vicus Novus [the new village], and later on Novoe Selo. Although there are sources referring to Enisala Fortress under the Latin names of Heraclia or Heracleea, how can the Turkish influences be explained?


Built by the Genovese powers at the end of the thirteenth century/beginning of the fourteenth century on the ruins of a Byzantine structure and later on included in the defence system of Wallachia [the southern Romanian region stretching during the rule of Mircea the Elder (1386-1418) between the Southern Carpathians (to the north), the Danube (to the west and south), and the Black Sea (to the east)], Enisala had a strategic and military role. Its main mission was to control and to defend the land and especially the water traffic when Lake Razim – which it overlooks – was still a gulf of the Black Sea. During that period, the Genovese were practically the only ones in the region to afford investing in a construction of such grandeur and Enisala Fortress was an establishment to join the other Genovese settlements in the region – the towns of Chilia and Likostomion in Danube Delta, Cetatea Albă at the mouth of Nistru River, as well as Caffa and Balaclava in southern Crimea. First conquered by the Turks in 1388, it was reconquered by Mircea the Elder in 1393 and lost again to the Turks in 1417. When the latter managed to conquer Chilia and Cetatea Albă in the second half of the fifteenth century and following the formation of the sand streams separating Lake Razim and the Black Sea, Enisala was abandoned because it was no longer according to the strategic and economic interests of the Ottoman Empire. 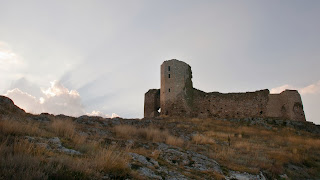 Enisala’s downfall would actually be its salvation. In spite of the order given by the Russian generals, aiming at the destruction of all the medieval fortresses in northern Dobruja 200 years ago during a period of heightened Russian influence in the region, Enisala was the only one to escape by being inactive at that time. As a result, it boasts the label listed at the beginning of this article and can still delight the eye of the travellers and historians alike.