Converting the Other in the Cantigas de Santa Maria

As in only few other instances in medieval history, the kingdoms on the Iberian peninsula had populations of different religions living in often close proximity. Without question this posed a number of problems for the Christian church, one of them being the conversion of Christians to Islam or Judaism. That these conversions occurred is documented, though they were not so much happening in large numbers but rather in individual cases.1 Nevertheless, they were anything but welcomed by the church. It is not very surprising therefore that we, at least to my knowledge, don't find visual material depicting conversions to Islam or Judaism. Conversions to Christianity, however, both from Islam and Judaism, were indeed depicted by Christian artisans.I will in short present two examples of such imagery in this post, both are part of the Cantigas de Santa Maria manuscript in the El Escorial (ms. T.I.1).

On fol. 68v the visual narrative begins by presenting the Christian-to-be as looter of Christian property, 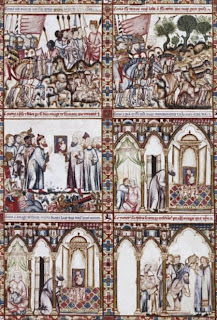 illustrated in the two images in the top register. His turban and beard mark him as Muslim. He is then shown selling everything, apart from on single image of the Virgin Mary and Christ child, which he keeps for himself and that he ostentatiously presents in the second register. The narration then switches to his home. Here the image of the Virgin miraculously begins to lactate, thereby convincing him and his family to convert, which is illustrated in the last image on the page. Several points about this imagery are notable. While the text of the story focussed on the man and the wonder taking place in his home, the illustrations have an additional scene taking place simultaneously to the miracle. The wife and child of the man, depicted on the left were added in the illuminations. She and her child are indiscernible from Christians by their looks alone. The space within which they are depicted however makes their religious affiliation unmistakeable: a piece of cloth above the alcove, where she sits with her child identifies her as Muslim. Tied around two pillars, it displays pseudo-kufic script framed by four swastikas. While mother and child appear to be in embrace in the first of these two scenes, in the second one she breast feeds him. Remarkably, this is the very scene in which the image of the Virgin stars lactating. The two women are thereby linked through the act of giving milk. 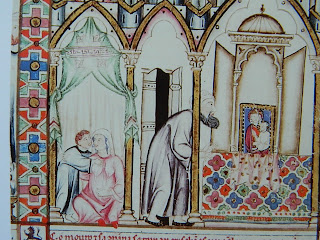 Several conclusions might be drawn from the imagery. For one the conversion is the result of miracles, so that one might be inclined to suggest that the imagery implies the Muslim figures are so far away from god, that they need a miracle to be converted.2 However, one must not forget the text itself, miracles are the central part of all of the narrations of the Cantigas simply due to the genre. The visual link that is established between the Virgin and the Muslim woman further contradicts with this explanation. Instead it seems plausible to suggest that the contemporary approach regarding the Islamic threat in the thirteenth-century is reflected in these images. A strategy of conversion rather than of elimination, which also had an impact on other media as the Vita of St. Raymond shows, terminus ante quem 1351, that tells of the conversion of more than ten-thousand Muslims.3

A different story is told in Cantiga 25. Illustrated over two pages, the Cantiga tells of a Christian who borrowed money from a Jewish money lender. When the time for paying the money back comes, the Christian happened to be in a different city, unable to give it back himself. By calling upon the Virgin he is eventually able to deliver a chest with the money through a miracle. The Jew, however, decides to hide the chest and pretends to have never received the money. His scheme is eventually foiled and 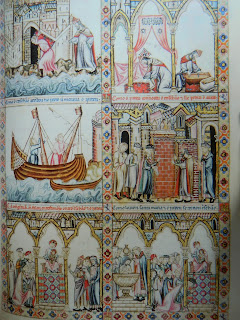 exposed by the Virgin, resulting in his conversion to Christianity. While the Jew is the depicted with what at that time were commonly used visual markers such as, a crooked nose, pointed hat and a beard, it is notable that his conversion results in a visual change. He is depicted in profile view in every single image before the conversion, a technique often used for figures of questionable character, but during his baptism he is shown in a three-quarter profile view.4

As in the other image, it appears as if these images reassure their readers that the religious Others can be tamed, that the Other while in their midst might be made into one of their own. The reality, however, was quite different, even if Muslims or Jews converted to Christianity they were frequently still considered suspicious characters. One might suggest therefore that these scenes of conversion are not manifestations of the desire for a peaceful life together under one religion. Rather they are a reassurance of the superiority of the Christian belief, presenting the audience with visual evidence of Christianity's victory both on the material plane (as e.g. in scenes of military success that I have not discussed here) and on the spiritual plane.