In the Margins: Reading a Fifteenth Century Medical Manuscript

London, Wellcome Library MS 5262 is a late medieval vernacular medical recipe collection. The manuscript was copied in the early fifteenth century, in the area of Worcestershire. It is rather small in size, and still in its original fifteenth-century binding. The manuscript contains medical recipes which tell its reader how to cure common diseases ranging from tooth aches to stomach aches or headaches.

The past two decades have witnessed an increased interest in marginalia, especially in the field of literary studies. In our society the marking of books is generally perceived as a form of vandalism. However, annotating books bridges the gap between the text and the reader and allows for them to project their thoughts on the text and their engagement with the text onto the material object. The reader is able to create a unique copy of the book they are reading. It is this process of engagement between the reader and the text which can shed light on the use of the book, which is especially attractive for scholars of the book as a historic artifact. In this blog post I will give examples of how and by whom MS 5262 was used.

MS 5262 contains several marks of ownership, all of which date to the post-medieval period. ‘H. Henri Dingley’ added his name in the ruling on top of folio 12r. Palmer identifies him as ‘Henry Dyneley/Dineley or Dingley, d. 1589, of Charlton, Worcs’. The fact that Dingley’s Worcestershire origin fits in with the manuscript’s place of production, Worcestershire, suggests that MS 5262 circulated in the Worcestershire area till at least the end of the sixteenth century.[i] 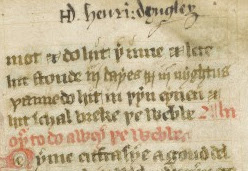 Andrew Wilkinson, an early modern owner, left more elaborate marks of ownership in the manuscript. He has indicated his ownership twice. Folio 34r reads: ‘Who so (e)wer on me doethe louk (and) aim Andrewe Wylkynsons bouk’. His second annotation on f.60v reads: ‘I perteyne unto Andrewe Wylkynson Surgeon’ and includes a shield with his initials.

A third signature has been added by ‘a dryden’, who could not be further identified. Finally, there are traces that MS 5262 must have made its way to Liverpool by the eighteenth century. An annotation on f.39r reads: ‘Liverpool May 1732’. This could suggest that MS 5262 is likely to have circulated in the north of England.

Fifteenth century owners did not only leave signatures in the manuscript, but also used the space provided to insert additional texts. Folio 61v contains an additional text in Latin. The text is a prayer to St. Cynehelm also known as Kenelm, an Anglo-Saxon martyr and saint, of the ninth century. It is interesting in this context that St. Cynehelm is associated with the area of Worcestershire/Mercia. Although its overall content does not relate to medicine, one line of the prayer alludes to it:

Although the phrase ‘esto nobic medicina’ is not uncommon in medieval prayers to saints, it is possible that the annotator saw this as a link to the content of the manuscript. 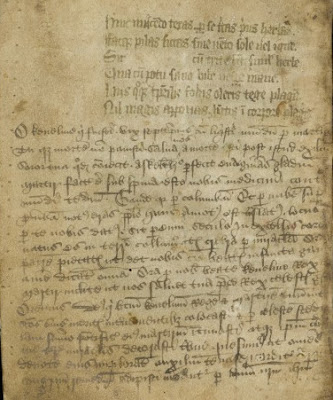 Moreover, the manuscript contains several fifteenth century marginalia, which serve as additions to the text. For example, a reader has added the word ‘hot’ to recipe as an indication of the warmth that is necessary to relieve a back ache, and on one occasion the preposition ‘on’ has been added to indicate the place of application of a remedy. These additions underline the fact that MS 5262 was read in order to be put to practical use. 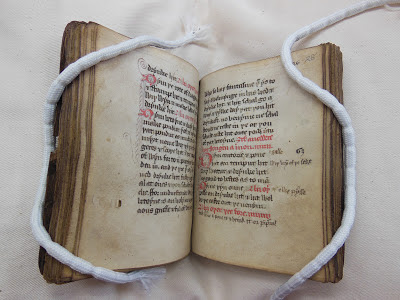 MS 5262 also bears marks of use by early modern owners. They all target the Catholic content, which includes charms, which have been crossed out, as well as illuminations depicting saints, which have been blackened. An example of offensive text appears on folio 39r, in the form of a variation on the ‘Flum Jordan’ charm, a common charm used to stop bleeding.[ii] This charm, which must have reeked of Catholic superstition to post-reformation readers, has been crossed out, along with two more examples of charms of this kind in the manuscript. To indicate to themselves or to a future reader that these passages were to be skipped, the early modern reader has added a generic designation in the margin, in a sixteenth century secretary hand:  ‘a charme’ In this context, it is important to note that what is at first sight an engagement with the text, is in fact a refusal to engage with it. Along with the damage done to the illustrations of saints, these alterations seek to obliterate the text. Thus, science is separated from religion, an action deemed necessary by the early modern reader in order to justify the use of this manuscript. 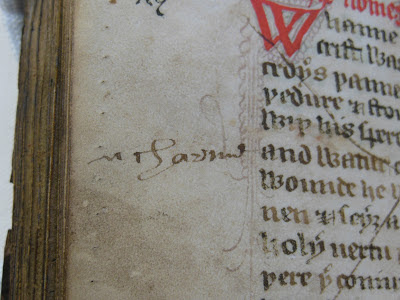 A short overview of the different kind of marginalia in MS 5262 thus shows the ways in which this book was used and by whom it was owned in the fifteenth century and beyond. The lack of early modern engagement with the text suggest that by the end of the sixteenth century, MS 5262 had evolved from being regarded as a utilitarian tool to be personalised to a historical artifact to be archived.