Somewhere between 738 and 743, the English missionary Winfrið, known to posterity as Saint Boniface, wrote to his friend Eadburga, abbess of Minster-in-Thanet in Kent. Boniface, who had traveled to the Continent with “vero religiosae, ... valde eruditiae in liberali scientia " (“Truly religious women, well educated in liberal learning”) (Levison, cited in Olsen). Boniface was struggling to convert the Franks and needed elaborate materials that would impress the treasure-loving pagans with the wealth and power of the Christian God. He wrote to the abbess:

I beg you to continue the good work you have begun by copying out for me in letters of gold the epistles of my lord, St. Peter, that a reverence and love of the Holy Scriptures may be impressed on the minds of the heathens to whom I preach.

“Auro conscribas epistolas domini mei sancti Petri apostoli”: this is a task for skilled, professional copyists, not for lady amateurs. Less than a generation after the death of Bede, the most influential figures in Anglo-Frankish monasticism were accustomed to requesting that Anglo-Saxon nuns  copy elaborate manuscripts—and those women were accustomed to filling those requests, with skill and considerable artistic flair.

One of these ‘truly religious women’ was  Þryþgifu or Lioba, a nun educated at Wimborne in Dorset by the scholarly abbess Tetta. Moving to Minster-in-Thanet, Lioba was then educated by Eadburga. Apparently a kinswoman of Boniface’s, Lioba went to the continent as a missionary and became the abbess of Bischofsheim, where she established a school, was renowned as an educator, and ran a scriptoria staffed by women (see McKitterick). The works she and Eadburga are recorded as reading are scholarly and difficult, testimony to a culture of Anglo-Saxon religious women’s learning and reading. Two of Lioba’s contemporary nuns, the sisters Harlindis and Relindis of Aldenaik in Flanders, are said to have copied a Gospel book now preserved in a reliquary at Maaseik (Budny 1985: 383). Rosamund McKitterick (1992) has exhaustively documented the development of women’s scriptoria in the convents established by Anglo-Saxon missionaries in Germany, as well as the frequent and regular exchange not only of ideas and manuscripts, but personnel among them. 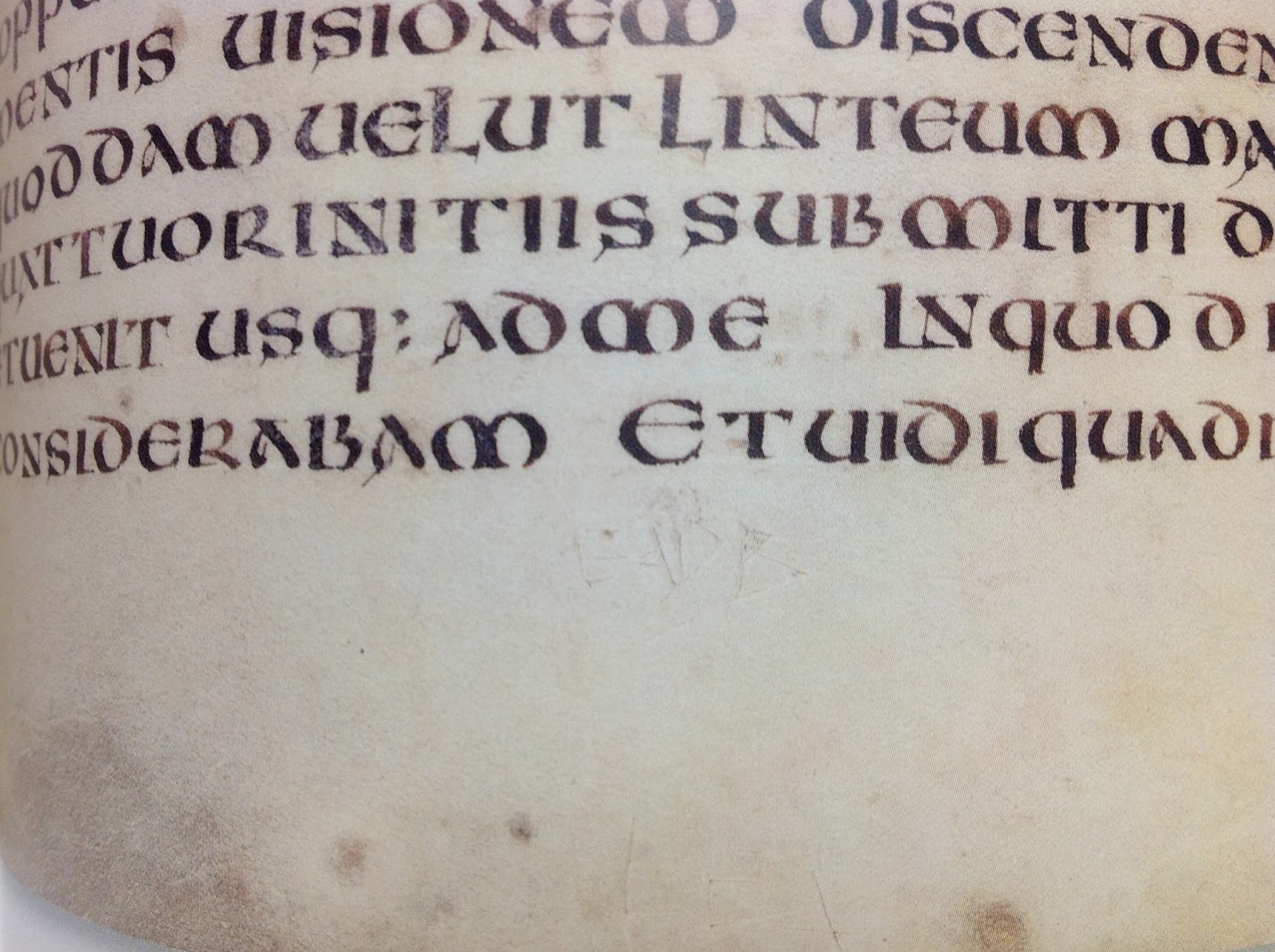 Similar convent-based scriptoria also existed in England. Excavations of Anglo-Saxon nunneries at Barking and at Whitby have revealed complete and fragmented styli, which were used in medieval scriptoria for a variety of tasks from pricking and ruling leaves to underdrawing to hard-point annotation. One such hard-point annotation is found in the Selden manuscript of the Acts of the Apostles copied at Eadburga’s  Minster-in-Thanet in the eighth century. The great German paleographer Bernard Bischoff suggested that the initials ‘EADB’ scratched in the bottom margin with a stylus might well suggest that the manuscript had been handled, if not owned, by Abbess Eadburga, since she copied those epistles for Boniface in gold on purple vellum. (Boniface’s successor Lul sent a silver stylus as a gift to Eadburga after Boniface’s death; few critics can resist the temptation to imagine these letters being written with that silver stylus) (In the Beginning). Since the manuscript also contains prayers with female grammatical forms, it is tempting to imagine that the Selden Acts were copied for a female owner, though this cannot be proven conclusively.  Nonetheless, ample evidence suggests that Anglo Saxon nuns included among their numbers scribes of high caliber.

In the early eighth century, works written for these literate women begin to appear. The most notable is Aldhelm’s De Laudibus Virginitate, c. 705, which laid out an ambitious reading program for the nuns of Barking to whom it was addressed. As Michelle Brown dryly notes, “its complex literary style gives an indication of the standards of learning expected (whether or not they were achieved) of abbess Hildelith and the nuns of Barking, to whom it was addressed” (Brown [2001] 46). An early surviving copy of this work, now Royal MS 7. D. XXIV, f. 85v, shows a dry-point sketch of an epicene figure copying the text. Though usually described as an author sketch, the hair and facial structures are in fact also typical of portraits of holy virgins—the subject of Aldhelm’s text. Likewise, somewhere about the time Aldhelm was writing De Laudibus Virginitate, an ownership inscription was copied into a manuscript of Jerome’s Commentary on Ecclesiastes, now in Wurzburg. The inscription reads “Cuthsuuithae boec thaerae abbatissan,” “the book of Cutswitha the abbess,” perhaps in her own hand, with the word “abbess” repeated in a more “artistic” uncial, as if she is trying to design her official signature. Michelle Brown suggests that another passage in the manuscript written in a very amateur English hand may be one of Cutswitha’s nuns learning the script from her abbess (Brown [2001] 47-8) Bede reports that Anglo-Saxon princesses frequently traveled to continental convents to continue their educations before returning home to marry; thus, the convent served as a locus not only for producing books, but for allowing both religious and lay women access to a wide variety of texts and methods of book production.

But by the time of King Alfred, English monasteries and their education were definitely on a downswing; Alfred thus ordered a massive campaign of manuscript copying to replace works destroyed by Viking incursions and to be accompanied by an educational program much like the one he himself had undertaken as a boy, when he memorized poems, learned psalms, prayers, and religious offices by heart, and pursued all kinds of reading (Keynes and Lapidge 74-75). He established monasteries and at least one convent, the Nunnaminster of St. Mary’s in Winchester, where his daughter Æthelgifu was installed as abbess on lands deeded to Alfred’s queen Ealhswith at the dawn of the tenth century.

A group of manuscripts associated with the Nunnaminster have been identified by Malcolm Parkes as being copied by female scribes; they include the Book of Nunnaminster, the Trinity Isidore, the Parker Manuscript of the Anglo-Saxon Chronicle, and the Junius Psalter. The Book of Nunnaminster, which originally came from Mercia, preserves forms of confession and absolution and prayers containing female grammatical forms, as well as the contemporary record of Ealhswith’s land donation for the minster (Parkes). This wide range of copying in a small, new women’s monastic foundation headed by Alfred’s daughter suggests that the Nunnaminster scribes were actively engaged in producing the kinds of books whose loss Alfred had so deplored, both for the use of the nuns in their own foundation and for distribution elsewhere. Pamela Robinson has furthered this research, attempting to identify some of the Nunnaminster scribes by name. If there is an “Alfredian revival” of learning in early ninth-century Wessex, then part of the credit must go to the Anglo-Saxon nuns who contributed to the accessibility of texts.

Credit should also be given to a group of Mercian female scribes who produced a group of prayerbooks in the late eighth and early ninth centuries. These include the Harleian Prayerbook, the Royal Prayerbook, and the Book of Cerne (Brown, in Kay and Sylvester 51). Brown and Brooks both associate these manuscripts with the Abbess Cwenthryth, sister of St. Kenelm, one of the earliest abbesses of Minster-in-Thanet. Ealhswith, Alfred’s queen and co-founder of the Nunnaminster, was Mercian by birth; if she brought the Book of Nunnaminster to her new foundation, its transition from Kent to Winchester would be accounted for.

The Royal Prayerbook is even more interesting, because it appears not only to have been executed for a female reader, but for a female healer; besides prayers and texts with feminine grammatical constructions, it contains prayers and charms associated with excessive bleeding, an unusually large number of female saints named in the litany, and other indications of gender-specific content tailoring. Only seven leaves of the Harleian prayerbook now survive; yet in this limited sample there are indications of female ownership in the distribution of saints in the litany and at least one prayer in female grammatical cases. These manuscripts, like the Nunnaminster manuscripts, required well-educated, sophisticated scribes to copy them accurately and to develop whole regiments of scripts and decoration with which to train successive generations of scribes—and these Anglo-Saxon nuns, like their Frankish contemporaries, were well-qualified for the job. Combining in equal parts devotion, intellect, and skill, they contributed significantly to the development and preservation of learning in a time when its survival was parlous at best. But by the second quarter of the tenth century, female scribes had all but disappeared from Anglo-Saxon England. Why did this happen, and what became of these artistic, well-trained women? I’ll speculate on that in the second part of this post.